These notes have been written to guide and instruct the pilots who wish to fly guests in our area. The following will describe the take-offs and landings and how to reach them. Not all take-offs are accessible by car. Some are within or on foot or by chairlift or other facilities. All landings have the option of parking at the side or in proximity. Below are listed the essential data of take-offs and landings in the area of flight.

You can download here the file containing the waypoints listed below.

Notes: The take-off is accessible by car and driveway with asphalt (journey time approximately 45 minutes). From Deltaland you can reach the take-off with its own means or with shuttle (if available). Easy take-off and also suitable for neo-pilots. Flyable with winds from SE to S. Absolutely not flyable with moderate winds from SW to NE.

Notes: The take-off is reached by walking through a dirt road (1.4 km – 15 min.). Easy take-off and also suitable for trainees. Easily flyable with winds from the South to the West. Absolutely not flyable with moderate winds from NNW to the E.

Notes: The take-off is reached by walking through a path and / or a track (1.4 km – 20 min.). Small (max 2 paragliders open) and technical take-off, suitable only for expe-rienced pilots. The take-off is not used by hang-gliders due for its difficult accessibility. Flyable with winds from SE to S. Absolutely not flyable with moderate winds from SW to NE.

Park: The parking lot is the same as for take-off “Gas”.

Notes: The take-off is reached by chairlift. Easy take-off and also suitable for neo-pilots.

Flyable with winds from SW to W. 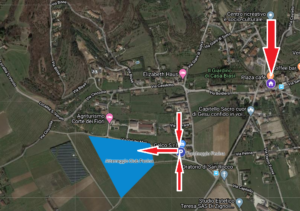 Notes: Large landing. With sustained winds from S can result in downwind. With strong thermal activity (summer, middle of the day) can lead to detachment of bubbles and thus may be technical or risky.

Notes: It’s a landing on a private area. To apply when, due to the turbulent conditions aerological, landing at Deltaland is risky; or … when the pilot who intends to land in Deltaland considers that such landing is risky in terms of its capabilities. Strictly avoided in such stages risky maneuvers and overflights of the adjacent streets.

Notes: Prada’s landing place. Not suitable for hang-gliders because the terrain is very hilly and irregularly populated by wild rose bushes. Pay close attention to the nearby high-voltage power lines. Not equipped with cowl. Generally the wind on land is valley breeze from the south.

In addition to landings described above, in case of need it is possible to land in the wide fields that inhabit the plains of Caprino Veronese. Every single pilot will put care of land in fallow fields or where the crops have already been collected. In any case, here as in official landings, you must vacate the area by moving the hang-gliding or paragliding in the peripheral area for dismantling or folding.